Are Your Online Term of Use/Terms of Service Still a Binding Contract? Likely Not Anymore.

A website or app’s Terms of Use or Terms of Service (its “TOU”) is the contract between the site and its customers/users/visitors (“Users”).  As with any type of contract, whether written (physically or digitally), oral or formed by conduct, mutual manifestation of assent is required for that TOU to be enforceable.

Most sites and some apps say that a User agrees to its TOU merely by accessing or using the site or app.  These are called “browsewrap” agreements.  Here is an example of this type of language, which often appears at the beginning of a browsewrap TOU:

TOUs are also often hard to find and access.  Their link is usually buried somewhere at the bottom of a site’s landing page, among many other, similar looking links.
Here is an example of this: 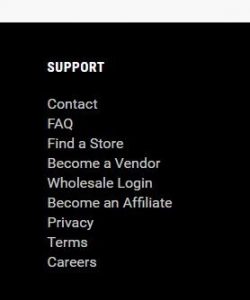 (On the site this example was taken from, the “Terms” link is near the bottom of this column of links, which is one of five equally-sized horizontal columns of identical looking links at the bottom of this site’s landing page.  You cannot see any of them without a lot of scrolling down).

A case that was decided in federal court in California this last July [1] ruled that these browsewrap agreements are unenforceable.  In that case, a customer wanted to sue the site owner in federal court, where he could get potentially high-dollar statutory damages, among other relief.  The owner tried to force arbitration, where the customer couldn’t ask for these types of statutory damages, as the owner claimed the customer was bound by the owner’s TOU, under which Users agreed to arbitration for any dispute they had with the owner regarding a User’s use of that website.

The court ruled that because the customer had no knowledge, constructive or otherwise, of the owner’s browsewrap TOU, he was not bound by the arbitration clause contained in it.

Like the above example, the owner’s TOU link appeared at the bottom of its site’s landing page.  It was in a four-column grouping of 27 other links, “sandwiched” near the bottom of one of the four columns.  These links covered a variety of different topics, such as Careers, Gift Cards, and Find a Store.  Because of this, the court ruled that the TOU link’s location was not conspicuous enough to put Users on inquiry or to give them notice of the TOU’s existence, due to its location and lack of differentiation from the other several, similar-looking links surrounding it.

But, even having a more conspicuous and prominent browsewrap TOU link on multiple site pages may not be enough to render it enforceable.  In a federal court decision in a different part of the U.S.,[2] the court acknowledged that the site owner there made its TOU available via a link on every page of the site.  They also noted that these TOU links were in close proximity of links to relevant buttons Users must click, including to “Download Now” the free software at the heart of this case.

Despite this, the court still found this protocol didn’t constitute constructive notice of, let alone assent to, the TOU, because there was otherwise no notice or prompts to Users for them to take any affirmative action to demonstrate assent to the TOU regarding that software.

These rulings are part of a judicial trend in the U.S. of denying enforceability of browsewrap agreement TOU as not giving actual or constructive knowledge of them to the User, preventing the User from affirmatively agreeing to them.

So, what should you do if your TOU is a browsewrap agreement?  Have it revised into a “clickwrap” agreement.  Speak with your web designer and digital media attorney (who should always be part of the web site or app design process) about converting yours.

What is a TOU clickwrap agreement?  One where the User has to take some action affirmatively agreeing to it.  This is usually done by making the TOU link obvious to Users, requiring them to open it, allowing them to review it and requiring them to click an “I Accept” button, as a condition of completing a purchase from, subscription to or registration on that site or app.  Some sites and apps take this even further, making affirmative assent to their TOU a condition of accessing anything past their landing page.

There are also some additional steps you should take to increase your clickwrap agreement TOU’s enforceability.  These include making the “TOU” link more prominent in location and appearance than any other links.  This can be done by it being on each site or app page, in a more prominent location than other links, without having to scroll down to find it.  It should also be in a larger font size and different color than other links.

Do not run the risk of having your current TOU be unenforceable when you need it to be.  Ban the browsewrap!  Come to the clickwrap!